A note from aric

I asked my grandfather, Bryce how he got started in glass and he sent me this:

‍I got out of the army in Oct. 1945, and came to live with my parents in Richmond. Because of my Air Force experience I got out much earlier than most when the war was over. They had moved there from Ark. to work in Henry J. Kaisers shipyard. They lived in a small house next to Frank Miller Glass Co. I first went to work at a body shop sanding cars to get ready for paint. Then I worked for Standard Service stations selling gas. The first location was on the highway from Richmond to Oakland near Ashby. I had an accident on my motorcycle going home from work and was bruised up pretty bad. I had a mild concussion and didn’t even know my name for awhile. While resting after that I was talking to Frank Miller, he asked me to work for him in his paint department.

I don’t remember for sure, but I made about .75 cents an hour. He was building a new store on Barrett Ave. about two blocks away. It was a much larger shop than his old one. I helped put the glass in it. The whole front of the store was just for the paint department. There was one man who managed the paint dept. I worked for him, and later worked into the glass part of it. Many times I would be the only one there to wait on customers for glass. I went with them when they did large plate windows to hold the top of the glass while they were setting it at first. Most of the new stores used very large plate glass. The wind would blow them out sometimes. He put glass in a new Ford dealership that all the glass was blown out of the front of it.

He hired his younger brother, Gil Miller about that time. Frank had bought a new chev. truck and when we went on jobs Gil always drove, he was a terrible driver. It was a cabover 2 ton with the body built so that even large glass had to be lifted up into the bed of it. He always had plenty of men to do it though. I think it was about 1950 they opened a branch shop in Walnut Creek, They put me to work there, I loaded a truck up with glass and drove from Richmond. I picked up Gil on the way and he rode with me most of the time.

One morning his wife waved to us, then went back in the house where she was having a cup of coffee. She died there sitting at the table after we left. A few months later I told him he should marry my wife’s aunt and retire because she is wealthy. He said get me a date with her. They had auto races in Concord then so Alice and I took them to the auto race. They started talking about getting married that night and got married about three months later, and he retired in less than a year later.

Granpa (Vester Bryce Wilson) died in 2012. He is buried next to my grandmother Alice in San Diego. 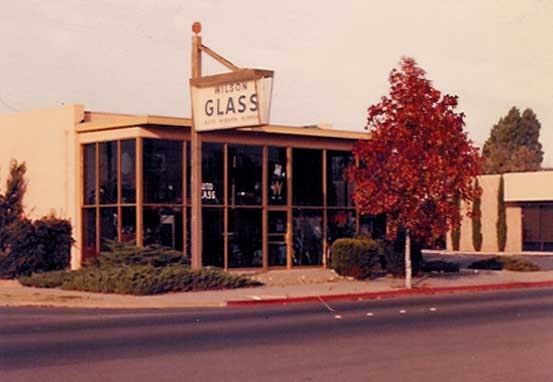 The Wilson Glass shop on Galindo in Concord. This building was bulldozed to make space for luxury apartments. 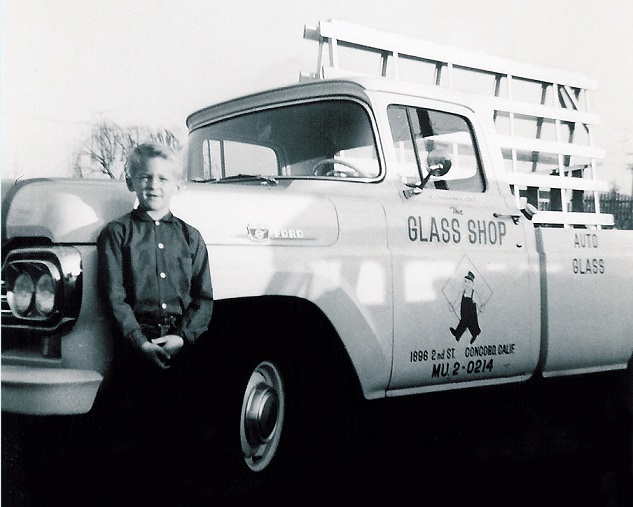